Under the photo: Father David Linnebur blesses Paulina WOJCIK, 7, t a Mass held Nov. 8 in the Wojcik Family’s honor. Seen next to her and mother, brother Marcin is hidden from view

They call it a miracle, not just a twist of fate

(a TCA feature by Rita Reno)

The 10 a.m. Mass at St. Paul / Newman Center last Sunday will not soon be forgotten as parishioners gathered to celebrate what can only be described as an “act of God.”

The “miracle” occurred Friday, Nov. 6, when Dr. Zbigniew Wojcik, an associate professor of computer science at Wichita State University who has been in political exile from Poland since taking the position at WSU, was reunited with his wife and two children after 20 months of separation.

A researcher at the Industrial Institute of Electronics in Warsaw, Wojcik received a job offer from WSU’s Computer Science Department in March 1985. He then got passports for himself and his family, and left for Wichita a year later knowing that his wife Barbara, son Marcin, now 12, and Paulina, now 7, would join him in about a month. But soon after he left, the Polish government revoked his family’s passports and permanently dismissed him from his research work at the Institute. Wojcik was also informed that his travel visa had been revoked and he would be imprisoned if he returned to Poland.

In January 1987, Wojcik’s new parish family began working together to solve his problem. Then Newman Center pastor Father William Carr began by writing letters to Sen. Nancy Kassebaum and the Immigration and Naturalization Service. From that point on, it was a series of fervent letters writing and praying that led up to reunion.

“I came to the Newman Center in March,” said Father David Linnebur, “and Dr. Wojcik approached me about his situation. I then wrote letter to Bishop Gerber. Larry Menestrina coordinated Masses for the family and wrote letters to the State Department and to Bob Dole and Nancy Kassebaum. Bishop Gerber wrote a letter to John Cardinal Krol, and Congressman Dan Glickman wrote a letter about the situation to Pope John Paul II.

“Finally, Dr. Wojcik had some friends who had some friends who knew Vice President George Bush. On his last trip to Poland, bush petitioned General Jaruzelski to release the family. The general must have allowed them to be released. But at the same time, Cardinal Krol sent a letter to bishop Gerber telling him that passport restrictions in Poland were being loosened. Then out of the clear blue, Larry called and said the Wojcik family would soon arrive in Wichita.”

Scheduled to arrive last Thursday night, Mrs. Wojcik and the children missed their connection in Chicago and instead arrived at 10:00 a.m. Friday. Since that time, there have been interviews, thank you and tears of joy. Sunday Mass was a chance for the Wojciks to be officially welcomed into the parish and the country by those who prayed so diligently for this special family reunion. Dr. Wojcik expressed many thanks to his friends for their support.

“I appreciate everything – for giving me the hope and praying,” he said. “It’s very hard to be Catholic in Poland. There is much discrimination, and they do not trust you. It’s very different here, and we like that. My family being here is proof of all the prayer.” The Wojciks huddled close together in their special seats near the altar as they listened to Father Linnebur tell their story to a church full of people. Emotions were high as Father blessed the family and made them official members of St. Paul/Newman Center.

“This can be looked at as just another twist of fate,” Father Linnebur told the crowd, “but for those of us who have eyes to see and years to hear, it is God’s call to this parish family that He is here with us.”

This site uses Akismet to reduce spam. Learn how your comment data is processed.

Do you want to read the texts in the newspaper photos ..? 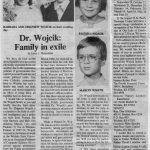 They call it a miracle, not just a twist of fate 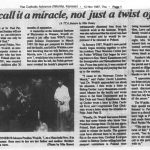